Join us at Hotel Seymour Supperclub!
Get Directions

Premium Cocktails
Truly unrivaled by any other 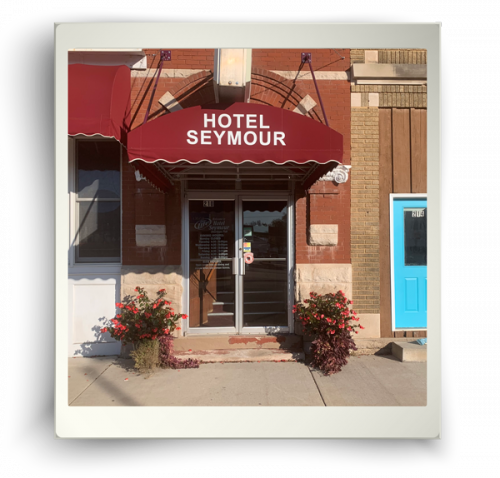 A Supper Club Steeped in History

Dining in a classic supper club is unlike anything else you’ll ever experience. There’s the beauty and allure of vintage architecture and décor, coupled with the air of sophistication and prestige. And, of course, the food and drink stand apart, giving you a culinary treat.

At our dinner restaurant, we strive to create an atmosphere that does justice to the traditional supper club. Tom Jackson is your host and the proud owner of this grand old historical hotel. His commitment to an authentic dining experience has distinguished this establishment.

Our history as a dinner restaurant is a storied one. Built in 1898, Hotel Seymour was originally known as Hotel Falck, named for its creator, George Falck. It features a two-story red brick façade and a full basement, which contained a barbershop and public showers for travelers to use after getting off the Green Bay and Western Railroads.

Rail-traveling salesmen often set up in the hotel’s lobby to show their wares, located on the second floor. At that time, the hotel boasted 28 rooms and several restrooms for guests to share—all for just $1 per day. Guests could even use the hotel’s horses, stabled in the rear.

In 1951, the hotel’s name officially changed to Hotel Seymour, as we know it today. Despite a fire in the mid-to-late 1950s—which damaged part of the upper level—it still boasts two renovated nightly hotel rooms, four renovated apartments, a lobby and several unfinished rooms.

Now, they’re stopping in for a house-made Brand Old Fashioned and a fine dinner restaurant in Seymour, WI. We invite you to stop in for a meal and thank you for dining with us. We hope you’ll come back soon and often.

Operated by Tom Jackson, we guarantee a fine dining experience of the highest caliber

The Epitome of Fine Dining

Whether you’re celebrating or treating yourself to high-class fine dining at a traditional supper club, Hotel Seymour Supperclub welcomes you. Contact us today at (920) 833-6441 for reservations or menu info. Looking for the best in fine dining? We have the best in appetizers, fine food and fine wine.

We are open for dine-in, take-out and curbside pickup.

Come in or call to order all your favorites!